I have been riding/working both Scout and Hoss on a regular basis (each 3 or 4 X per week) since I healed from my surgeries back at the end of November.

It's exciting to say that except for a few set backs such as a minor abscess for Scout, and what appears to be a mild strain due to a tripping for Hoss, both horses are doing great! We are so greatful to have an indoor arena to work in when the footing is lousy (such as today, with a soppy 14" of melting snow on the ground, and chilly temps). 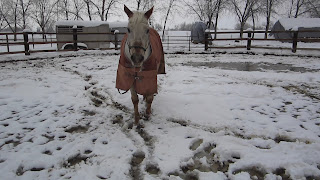 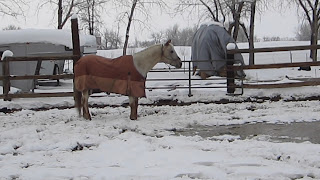 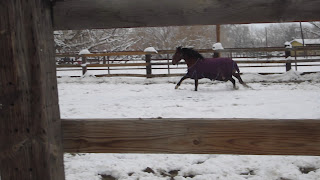 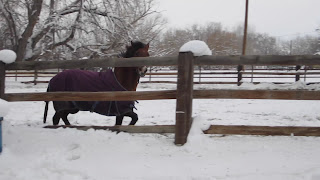 I did turn them out, and Scout decided he had to roll (thankfully in a snowy section) and then self-exercise for a good 10 minutes before we went indoors to pick the ice chunks he'd accumulated out of his front hooves and do some cool down exercising.

Hoss simply meandered when I turned him out. He's still a bit sore on the left front leg, so we just went indoors, picked his hooves and walked about. He's getting some aspirin in his pellets, which he sniffs, then refuses to eat, so I've been adding a top dressing of things. Pretty darn good at picking carrot pieces out, so we mixed in just enough sweet feed...may just need a few more days of this!
Posted by Scout at 8:51 PM