To the Show (we did not go) 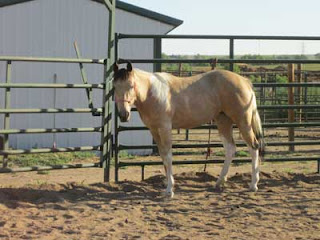 I arrived at the barn at 6:45am and gave Miss Mezza a partial flake of hay to eat before I put her in the round pen. It was still cool and nice, and we were preparing for her first halter and showmanship show. Things went as usual--stalking, some short longing, inhand work, and then a walk to the small field to practice walking and trotting at side around some of the big jumps out in the field.

Nothing seemed amiss. Dawn and Jennifer arrived with Dominique, an exchange student from Germany, who's been living with them for the past year, and Oliver, his Father. They gathered the other two horses, Luna (Mezza's dam) and Boo, Jennifer's horse. I walked Mezza up to the trailer, asked her to step up, and .... nothing. I asked a few more times, circled her, asked again... nothing.

Dawn and Jennifer tried offering food, treats, tapping her on the butt, picking up her front foot and placing it on the trailer floor--Mezza just approached the trailer each time and stopped right where she should have stepped up, or she pulled her hoof off if it was picked up. She was not upset. She seemed to have decided she was not going for a ride today. She had been on the trailer at least a half-dozen times before, and had ridden to the equestrian center twice before. She'd never refused to get on (only off!)  This was totally unexpected. So, Jennifer put Luna on the trailer first, then Boo, but Mezza could care less. Luna and Boo were taken off.  Mezza was indifferent.

Plan B.
Mezza got to trot circles. After several circles each direction I stopped and brought her to the trailer and asked her to load. Nothing. Repeat. Nothing.  By this time we'd worked about an hour! 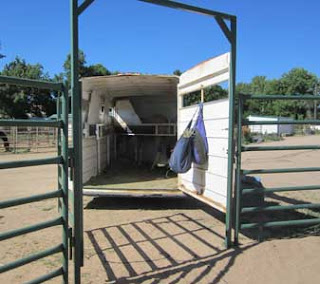 Plan C.
Dawn and Jennifer moved the trailer and backed it up to the round pen. I re-stalked Mezza for about 5 min. in the round pen--a little canter, a little trot, and then at the walk back and forth in front of the open gate that led to the trailer. She paused and entered the "alleyway" we all wiggled things and encouraged her and... she decided to step right up and went to the end of the trailer and started eating like nothing had happened. We congratulated her, Jennifer closed everything up, and Dawn took her for a short ride around the barn. We opened up the trailer (she seemed content) rubbed on her again, unloaded her and walked her to cool her down before putting her away to eat her breakfast. 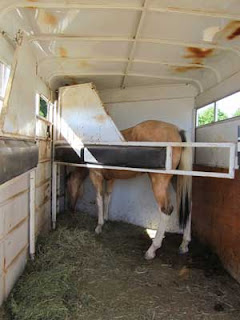 So that was the "Show that wasn't". Kudos to all as no one got upset, least of all Mezza.
Proves that even the best laid plans can never be set in stone!! Learning and practice are never over.

So we rode the other horses instead!