Well, that was yesterday, Thursday, and it really didn't go as planned. I started out with a "D" and finally scraped by with a B- on my disposition and patience (or impatience). In the end it was a lot of learning (patience) on my part, and a wee bit of innovation--or more likely flexibility by demand.

I had the brainy idea that I would ride both Mezza and Scout, so I gave Scout some bute, got the trailer hooked up (on a plus, my backing was a lot better than last time). Got everything loaded tack-wise, and hung a hay net for the first horse (Scout) by a little after noon. Scout hopped right in and promptly turned around in the trailer. I spent a good 30 minutes (or more) with him. He'd get right in, get halfway to his spot (in a 3-horse slant) and then stop. He'd step up, then he'd step back. If he turned, he wouldn't necessarily get out, just stop at the edge. I was thinking, "if you'll get out, I'll just put you back in until you don't wish to get out". Hmmm. Finally every time he took a step toward his spot I rubbed on him. I literally had to stop wishing he would move up and just not care about that--I just needed to care about him and not my stupid schedule. He stopped taking the step backward. I sighed. He finally stepped up in place and contentedly stood there, and started eating. I looked at him and shook my head. He was perpetually relaxed through it all.

Mezza, on the other hand literally jumped right in and sucked into her spot!  I will see if that happens when I trailer her alone!  Off we went. It's only about 1 mile to the center. There's a left hand turn lane in the middle of the road, then I saw the cones...."can I get around them," I wondered?  There were several men operating a skid-steer thing-a-ma-jig and putting down asphalt on the entrance drive. My heart sank. The entire entrance was blocked off. Dang. I kept the trailer going. Several cars passed me on the right. OK, change of plans, take the next left to G&J Lazy P! 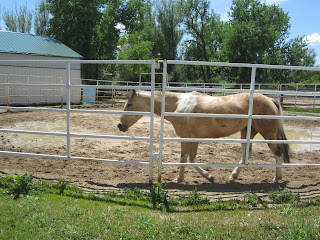 I'd been wanting to take Mezza to G&J's indoor arena at some point, as if the weather got bad that's a close place to go to ride, and good during the week. I thought, no problem. She's used to indoor arenas, outdoor arenas, etc. Hahaha. Never take anything for granted. She screamed for Scout when I first put her in the round pen. I parked along the dirt road and tied Scout to the off side, away from any traffic and where he could have some shade. Mezza was a dirty mess, so I put her in the round pen while I pulled the take and brushes out of the trailer. We did ground work in the round pen (avoiding some water), then cleaned and tacked up and went into the indoor. 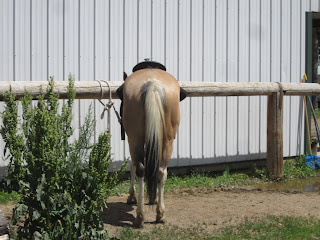 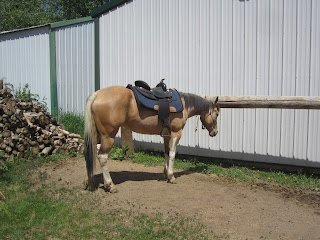 She did well with ground work and hand walking in there (thought the chickens were intersting), but was not the low-key self she had been outside. The saddle pad/saddle kept sliding back, and when I went to get on, things just weren't right. So, instead we went out tied at the rail and I struggled with the pad and saddle. Once that was resolved, back into the round pen we went and I finally realized I just needed to keep doing whatever I was working on until she relaxed, whether it was ground work or ridden work. I needed to lose my schedule and concentrate on her. Hmm, sound familiar? 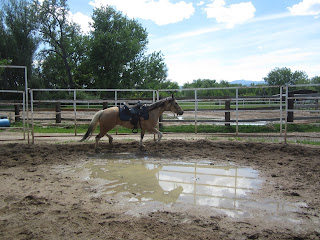 Looking for patience (mine) and relaxation (Mezza's)

It worked. First I looked for it from the ground. Then when I rode. There was one spot in the round pen where she kept trying to cut through and turn around when I rode, avoiding a big puddle by cutting back inside instead of going around it. So, the only thing we worked on was her willingness to go around the outside of the puddle at a trot, without hanging up anywhere. I'd let her turn, but when she cut to the center I'd disengage her a few times at the trot, taking the pressure off when she faced the way I'd hope she'd go. Seemed like that would never end, but it did! We ended up with a nice trot after about ? minutes of that, then a nice walk, and then she just got to hang out there at the place she had been so determined to avoid. So much for spending time in the arena...I was bushed, and poor Scout was patiently waiting at the trailer. 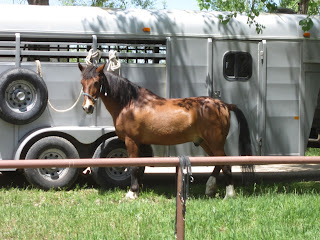 Well, Mezza got to hang out at the trailer while I took Scout for a walk. My plans got changed, and I have to accept that I am ultimately not in charge of everything. I need to be flexible, patient, and look for the good in each situation without making assumptions. I will try my best to remember this.

I guess it's otherwise known as "Sh-t happens".
Note to self--use a breast collar!
Posted by Scout at 9:28 PM