A Hoss and Scout day

The storms came in early today, but Mike and I had Hoss out in the field before they arrived. We have been trading off riding him, as Scout has been out of commission for quite awhile. I finally have my own set of reins so I don't have to shorten Mike's by tying knots in them!

After riding about the field as a warm up we dodged the storm and headed to the outdoor arena to join in some fun with cones. Hoss seemed to enjoy it as much as we did! 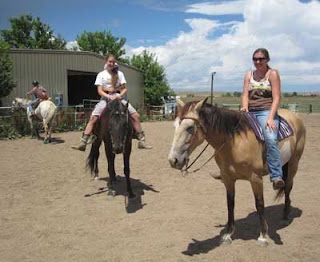 Later I took Scout to the barn and tacked him up in a surcingle, blanket and side pull. We did some long lining and ground driving in the outdoor arena. It rained a bit, but not hard enough to make us stop. Once the ground got damp Scout was really bent on getting down to roll, so I had my work cut out for me to keep him going. He did well.

Upon asking for him to back in the lines at the end, he started swishing his tail and stomping his right hind leg. I'm noting this because it may mean the left hock is bothering him again. He definitely liked getting out and getting attention!
Posted by Scout at 3:06 PM