An eventful day with Hoss and Scout 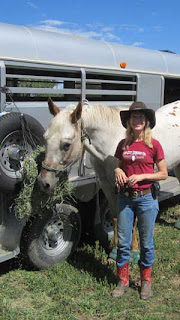 My husband, Mike, and I loaded up Hoss this morning and headed out for the Equestrian Center!  Hoss was not thrilled with riding alone in the trailer--took me a few minutes to convince him to stand alone quietly in the trailer so I could tie, and he whinnied as we left the farm, but was well mannered and stood well for tacking up as he was tied to the trailer. 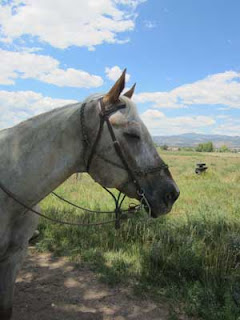 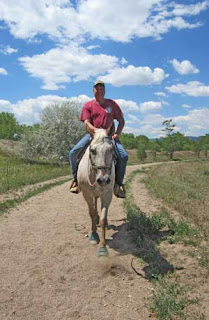 Mike and I (and I think Hoss) had a great time exploring the trail around the canal. It was hot, so we quit after a little more than an hour. Hoss actually drank from the tank while we were there, and we all relaxed together before loading him. He did not want to stand alone in the trailer (again), so we got in and out several times, and he had to circle if he didn't willingly get in. We need to trailer him a lot more in general, and a lot more on his own! The big plus was that he wasn't an anxious sweaty wreak after trailering, and he was polite and quiet!

Later I trailered Scout over for his chiropractor appointment. His back is a lot better, only minor soreness in the sacral area, and a little in the withers. Dr. Deb Schlutz has showed me a couple of stretches, one of which I knew from Kim Cavanah. Stretching the rear leg forward and holding it for up to 30  seconds, then increasing the stretch (gently) as the leg permits has helped to release the over tight right hamstring at the same time as Dr. Schlutz has worked to free the lower back where it was caught down from the extreme bucking.

Scout should be able to be ridden again this next month!  I will need to keep up on the stretches and watch the arthritis in his left hock closely. We still have a lot of ground driving over poles etc. to work in to the schedule, but I'm elated!!  : - )