The fly mask was really a non-event!

I stalked Mezza, and worked with her, doing in-hand and longing before introducing the small fly mask that a friend had used for awhile on her horse. I let her feel the soft edges, and mouth it a little, then I proceeded to rub it on her head, neck and over her ears before finally taking it off and on several times.

We finished with me leading her around in the round pen with it on, but taking it off before taking her back to her own pen.

Then, several days later, I again put a fly mask on her in the round pen, and practiced leading her in it at the walk, then the trot. I took it off to walk her back to her pen, but put it on again once she was back in her pen, and left it on her for about 10-15 minutes. She did not seem flustered.
Posted by Scout at 6:30 PM No comments: 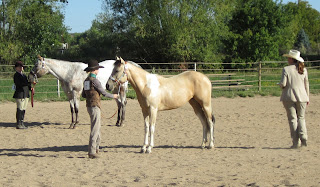 Dawn and I trailered Mezza over to the Indiana Equestrian Center for her second show on August 19th.
We loaded Mezza in a different spot, and she was a little flustered, so I took her out of the trailer and re-loaded her. She settled in and we were on our way. No problem with the un-loading at the center, and she got to eat while I put on her hoof shine, re-groomed her and Dawn put on her show halter (which is finally getting easier to unbuckle--those new ones need plenty of conditioner and work!)

Mezza behaved herself quite well,  and did a wonderful job!


This time for the halter class there was no "mouth check", but again, a very quick squaring up was required.

For the Showmanship class we had a new pattern, which was not a problem. The class had about 8 or 9 entries.

Going through the groundwork and preparation for showing covers so much of what a horse needs in basic training. It also requires getting up really early, and working with the horse a bit before she's ever loaded to go, but the show itself is so worth it! You will notice that our backing is not straight, something to practice, and more work is needed on the head down at the trot. Horses are so truthful, we cannot 'fib' our way through, they always point out the (my) weak spots that need extra work!!  : )

Mezza has been coming into heat now. It has never seemed to bother her, or to make her act our--that is until now.

Recently Dawn and I each discovered that Mezza had very sore flanks. Where touching her there had never seemed to bother her before, now any pressure there caused her to lay back her ears, grind her teeth, and eventually come after us with her mouth!

She was eating, drinking, pooping and moving well. The barn manager mentioned cysts on the ovaries, both Dawn and I looked at each other and thought--why would that produce pain so low?

The pain did appear to be inconsistent, this started after the 1st week of July, then tapered off somewhat, then got much worse by the start of August. Of course, during this time frame we've had some of the longest stretches of hot days on record, enough to make anything (horse or human) cranky and uncomfortable!

So, on August 1st, the vet arrived, and checked Miss Mezza out. I got to longe Mezza at walk, trot and canter for the vet--we don't typically longe at canter, so she doesn't even know that word. Well, she did just fine.  Then she received her sedation, which totally made her like a rag doll. Dr. Gary proceeded to ultrasound her ovaries, and yes, one of them appeared abnormally thickened.

Mezza was given a little time to wake up, and then was given a hormone shot. This, the vet said, would help Mezza's cycle continue, as it was most likey "stuck". Usually this can happen to young mares who are just beginning to cycle. In other instances a mare may continue to have problems, and either she can be put on birth control, or the problem ovary may need to be removed.  In a small percentage of cases, the problem is caused from a tumor on the ovary, but in that case it won't respond to the hormone shot, and the mare can often exhibit other more extreme behaviors.

The vet had us walk Mezza for about an hour after giving her the hormone injection. She went into a full sweat (read mare hot flashes) and appeared drunk!  She remained so well behaved the entire time, bless her heart!


Dr. Gary set up a follow up appointment for a week later, saying to handle her as usual until then. In the follow up he will again ultra sound her to see how the ovary reacted.
Posted by Scout at 9:34 PM No comments: