Leasing Mezza for the Summer!

Mezza and I get the summer together!

Dawn trailered Mezza down today. Mezza just had her 6th birthday on April 20th--so hard to believe!
I am so excited to be able to ride Mezza this spring and summer! Our big goal is to get out on the trails. 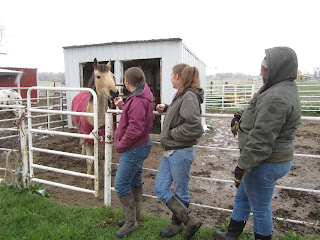 We started on this goal (among several) last fall at a clinic, and then at the equestrian center.
Last August I had the opportunity to take Mezza to a clinic in Platteville, CO that Kristi Plutt hosted for Joe Wolter. We worked on several things--not being attached/spooky at any part of the arena (this included getting rid of wanting to be near the gate, being happy to hang out down near the banner attached at the far end of the arena with the cattle on the other side) and loping and trotting in a relaxed manner all over the arena.
The next step was an introduction to grouping the cattle together and holding the herd, then moving through the herd, then finally separating out a heifer and moving it. Mezza decided she likes that quite well! At the end of all that we rode out of the arena, and Mezza and I were stationed so that when the cattle were moved back to their home corral they would turn at the correct place. It all went well. : )
Since that clinic, I've only ridden Mezza 2 or 3 times, one of which included around the perimeter of the equestrian center. For the past few months Megan has been riding her in an arena to keep her fit. (Thank you Megan!) Now we get the chance to again work on getting out of the arena. 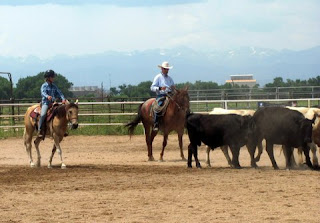 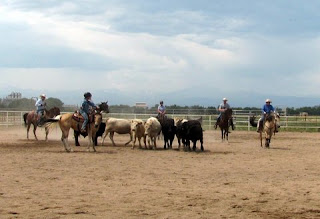 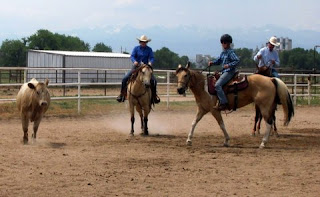