Today was drier than yesterday--so yesterday was cleaning and short turnouts (and mud)!
The weather was sunny today, and things will be drying soon (yeah!!) so I took advantage of it as much as possible and got some nice time in with both Mezza and Hoss. 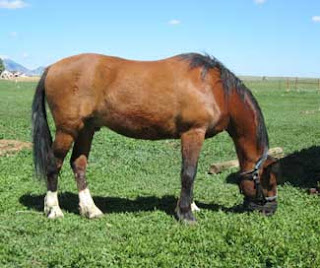 Scout gets the "picture of the day" along with a short grazing turnout (note the grazing muzzle). He's lost at least 50 lbs. since last summer, although he continues to get inflammation in his back when I ride him. It is nearly gone now (there is a slight bit on his top line in front of his pelvis). I think icing, along with Sore No More, will take the remainder out and then I'll do groundwork with him until he seems comfortable before I try riding again)

Her trotting at side on my left is improving steadily, but we still need practice. It was interesting to note that during the whip sacking she was more concerned about the whip on her left side--which is not her usual pattern. She never moved away, but was tense on her left at first, and was not tense at all on her right.

She is great with me putting my fingers in her mouth. In case I must be able to open her mouth for a judge during showing at halter I need to keep practicing it. This will come in handy for much more things.

When I finally went to put her back after an hour, we got to practice one more thing: walking through the large puddle at her gate. At first she went right through it, but wanted to run ahead. Upon asking her to do it again at a slower pace, she wanted to come into me. After about 5 times, she was keeping a nice distance, but was still not walking as slow as I'd like. Think we need to revisit that one!

HOSS
Hoss got his turnout in the morning while I cleaned--glad I put the turnout sheet on him as he rolled in a muddy spot out there and it saved time not having to clean most of his body!

We are getting better at the trailer--that is AFTER he decided he didn't want to go stand at the trailer (he balked, I asked, he balked) soooo, I asked him to trot around me a few (too few) times. So he balked again, and then I asked for more.....OK, he was a little cranky at first when he cantered in a few circles, but when I gave him a chance to stop and come to the trailer he didn't miss a step!  And he stood like a rock (OK, he moved once) while I tacked up and picked his feet.

We had a short (25 min. or so) but sweet riding session in the outdoor. We have tons of things to work on, including collection, but it is going well. What I notice most, is now as long as my expectations are clear, and I am firm about them, he will comply with little or no problem. This is building my confidence, and in turn is making our relationship a lot better!

Thank you to all the people who've helped me with both Hoss and Mezza--it is really starting to come together.