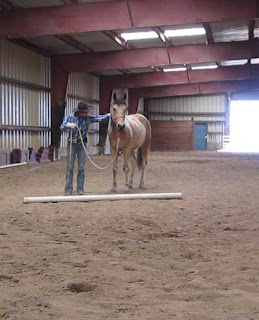 Mezza in hand, practicing the walk and whoa from the off side. 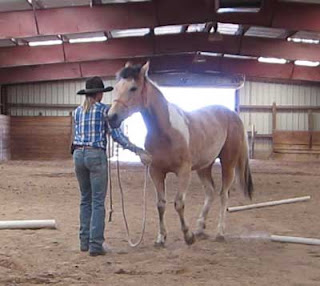 Practicing one form of the back from the off side. 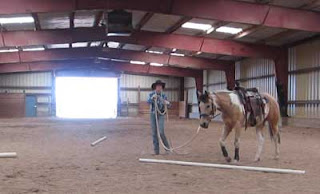 Longeing tacked up over ground poles.

The link to the longeing video: Longeing Mezza indoors over ground poles 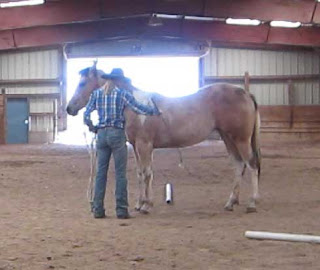 Desensitizing to the dressage whip

We did a lot of work with desensitization with the dressage whip, which has a small piece of white plastic back left on the end of it. Mezza did NOT like it tickling her ears, and wasn't too keen on having rubbed along her neck, especially when she saw it out of her other side! We practiced this for a while, and she calmed down, but will need it repeated for some time yet. Unfortunately in the video, we are far enough away that it is really hard to see the dressage whip at all!
I need to make sure I'm much closer to the camera for that!

The thing I wished to have gotten photos of was when I took her back into the barn where the stalls are. We practiced entering and leaving one of the stalls which has a good 6-inch step up into the stall. I'm trying to mimic stepping up into a trailer, since she had so much trouble stepping out of it last time we practiced. My friend, Jerry, suggested checking the stalls to see if one had a step up, and yea, I found it.

She stepped right in, and then I let her briefly explore the stall before moving her around in it, asking for her to turn her front away in a circle, then her hind, etc.  Then I asked her to step out and she started to then hesitated. I stood outside the stall as she explored the edge with her muzzle and gingerly with her front feet. She finally hunkered down close to the floor, and extended one front foot--slid it out over the edge and let it extend to the floor. I thought she would end up on her belly! She didn't. As soon as the foot found the barn floor she brought the second foot, and did a small hop out with her rears. I was proud of her, and she was obviously feeling good about it. I rubbed her, and then took her back in. She came out much better the second time, but still with a bit of a hop. The third time she wasn't sure she wanted to go IN to the stall. So, we did a bit of pressure and release. Coming out, no problem. Ditto for 4th time. We went in and out of the stall about 5 or 6 times, with her finally just stepping in and out with me.

The I gave her a break and took her up to the front of the barn for about 10 minutes before we came back for a "review" which she passed with flying colors! I'll need to repeat this for awhile. Then I plan to work on backing her out of several of the stalls, beginning with one that has almost no step up.

In the end I learned not to leave my camera and tripod set up in the indoor arena without supervision--even if it is on the opposite side of a fence!  One of the youngsters turned out in the arena was curious enough to put her head through the fence and tried chewing on my camera! LOL, it survived, but has teeth marks!  A good lesson to me.