The weather was nice today, even though it threatened to rain at times. 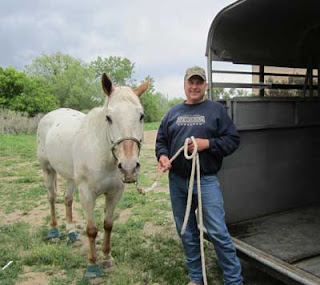 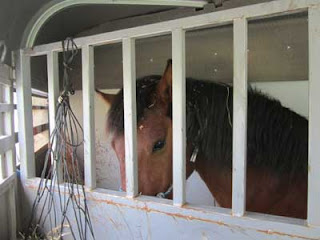 I loaded Scout, and then Hoss without a hitch, although Hoss looked like he wanted to back out shortly after loading, so I untied the rope and waited. He did not back out, so I rubbed him and retied the rope.

I met my husband at the Equestrian Center, where he rode Hoss and I walked Scout. We practiced walking Scout by Hoss' side, as if he were being ponied. No ears, and Scout didn't get scared!  Loading coming home, Hoss did back out part way, so I back him out all the way and we trotted circles each direction for a few minutes. He loaded right up and did not back again. 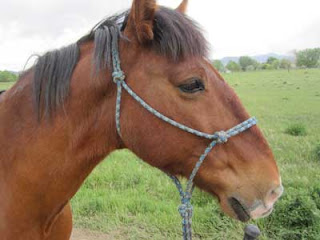 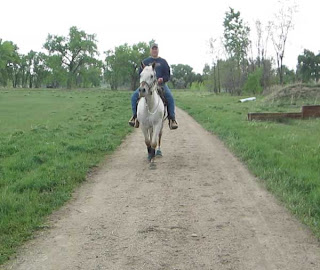 Once home, Hoss wanted to back as soon as I started untying. So I stopped untying and relaxed, guess what, he relaxed too!  We just stood there together! So I asked him to back out and stand right out of the trailer, then I asked him to come back in... he did, no hesitation, and promptly started eating from his hay net...was I happy or what!?

Later I worked with Mezza, and Ben gave me some help with stalking her and assessing her head carriage, before I let her come in. I get over eager to let her come in because she's asking, and then have to send her back out because she won't stick with me--LOL she needs to show more than an "ask" that head needs to be down, and the eyes soft as well as her ear on me. She usually won't lick and chew until she's stopped anyway!

I also worked on her walking and trotting at my side, from both sides, with stops, and backing at side. This is coming nice now, even from the off side. 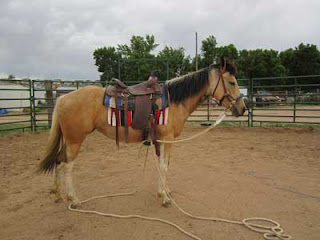 And, this was our first day in the long lines!! She could have cared less at my flipping the rope over her butt!  Ben has shown me several different ways to desensitize with ropes and whips
Posted by Scout at 8:52 PM