Scout
This is my little Mustang that I bought in April, 2005. By 2006 he looked really good, had filled out and was in good shape. I had to put shoes on his fronts, as his hooves didn't grow fast, and his soles were thin. In 2007 he started to go lame on the front after going barefoot in the winter. We shod him again, but he needed pads for awhile. Later, I believe the next year, he developed a "hitch" which I thought was in the rear. That did not get confirmed by x-ray until early 2010, and he was found to have some pretty good arthritis in his left hock.


Currently, Scout has very little muscle on his left side, and lots on his right (I noticed that he really looked uneven when ground driving him last week, and Jill, a friend who works at a vets commented on it after I asked if she would look at him). She said he's obviously been carrying the weight on his right side for some time. I'm perplexed because since last August we've given him injections in his left hock about every 4 months (August 15, Dec. 16, and April 17). His left rear leg seems better (he will back without swishing his tail), but his lower back continues to get inflamed, and his turning ability with the back legs seems worse.

This has been a problem ever since his fight with our other horse in January 2011, although the arthritis in his left hock has been an issue since early 2010. (He received one injection for the hock in March 2010 or April 2010, followed by an injection of Legend several months later.) I was told to ride him or work him lightly every other day, and Bute him with 1gram of Bute beforehand. This seemed to be fairly successful before the horses fought. If I had followed up earlier with another injection late that year it might have helped. However, everything went to  H.... in a handbasket after the two horses tangled, and from late Dec. 2010 until summer 2011 Scout had no injections, only chiropractor work, a lot of working from the ground, and little riding as he was quite sore. He was also overweight, and insulin resistant.

In August the hock was re-evaluated and found to have gotten a lot worse. Scout was in his own run now, not sharing with the other horse, and we could control his feed intake. Treatment began again on the hock. Initially it looked like this was the key! But, his front shoes had been left off for X-rays, and when those weren't put right back on he became sore on his fronts. His soles are thin. So, we put bar shoes and Equipack on his fronts. This helped his fronts, but he continued to be bracy and sore.

Therefore, Scout and I are trying a test of sorts. Every other day I will walk or exercise him straight (from the ground, not ridden) as I've been doing for some time--ground driving, walking up the little hills at the east end, or long lining in really big circles or on the straight at walk and trot. In addition I will add 10 minutes of longeing him in a circle to the left mainly at the trot, and if possible over one or two poles.

The photos I've posted are from two different dates. The first ones show Scout in late summer 2009, before he'd started to put on weight. 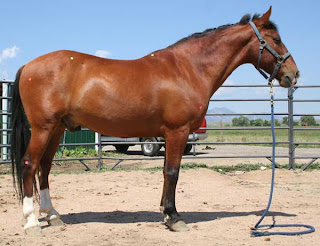 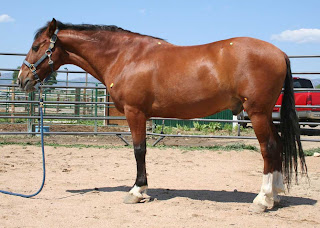 The second set shows Scout as of yesterday, May 18, 2012. He's lost a lot of his additional weight, but is quite sore in the back just in front of the LS joint. 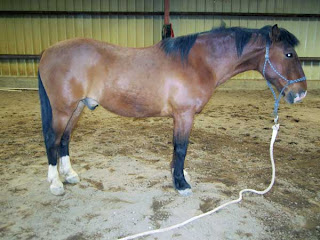 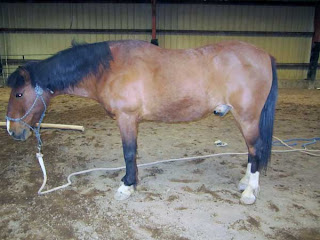 I want to see if this will help the left side. I'm hoping it will. Probably I will need to do this about three weeks at least to see a change?  If he gets sore instead I think I'll know sooner than 3 weeks that it's not working, but I don't really know what to expect. Right now any time I ride him I sore his back up, even if all we do is walk with a little trot, which may be because he still won't load the left side and walk evenly, or because it's just so much weaker he can't. We may need to rule out damage in his pelvis if this continues.

I worked with him on this yesterday (Friday the 18th) and since I'm writing this Saturday, the 19th (behind as usual!)  I checked him today. His entire back, both sides, from the base of the withers to the LS joint is really sore. However, I also gave him a dose of Ivermectin yesterday evening, and the weather changed abruptly as well, and I think that might have had an effect.  So today I put Sore No More all over his back along both sides of the spine and gave him a paste electrolyte. He seems to be eating and drinking well.  I'm not ready to jump to conclusions yet.

If anyone reads this and has any ideas, please let me know.
Posted by Scout at 8:27 PM