I've made several goals for working with horses (and myself) this summer.

Goal 1: Working with Mezza, the 2-year old filly, and getting her showing at halter at local shows
Goal 2: Getting comfortable riding, working with, and trailering my husband's horse, Hoss
Goal 3: Learning how to pony Scout (my Mustang) off Hoss 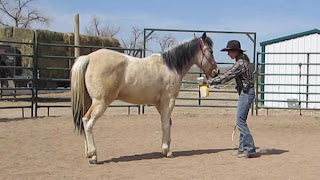 Goal 1:
I've begun chronicling my sessions with Mezza, and that is going well. There is still tons to do and learn. Always an adventure. You can check out my notes on progress with her on posts on this blog. 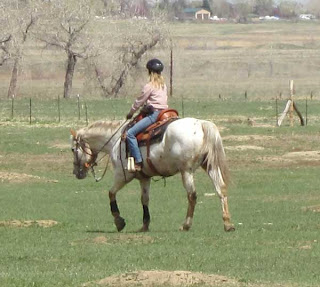 Goal 2:
Working with Hoss, is under way, thanks to many people!
A little background on Hoss and Scout: Since January 2011, Hoss and Scout have been separated after two intense fights one month apart, in which they stopped fighting only after Scout became so sore he could no longer kick. Scout, who once was the dominant horse, is now the submissive horse, and Hoss, once the underdog, and easy-going guy, has now become much more assertive, sometimes aggressive around other horses.

Therefore my husband and I are now learning how to become better herd leaders. We understand that we need to insist that in our presence, these two horses will not fight, and that each will have good manners with us as individuals as well. For me this has been an ongoing learning experience. Over the past two years I've taken riding and ground lessons with Hoss from Damian Ficca. From last summer on, I continued working with Hoss mainly on my own, with occasional help from two other trainers--Lisa McNamara, who has helped me with lessons on Scout, and Jill Wolf, who has provided assistance with preparation for trailering.

Then in late winter of this year, when Hoss injured his left front foot, I spent quality time in the barn with the horse that hates being indoors--cleaning, changing and wrapping his foot for over a month. I guess this was my preparation for furthering our trailering work. At Horse Expo this past March, I was able to watch Mark Bolander at one of his clinics. He spoke about the horse having to have confidence in us. Later I talked to him about that subject in regards to trailer loading, and realized it was myself who lacked confidence that Hoss would stand quietly once loaded and not back out. I lacked confidence because I didn't have the tools and understanding of how to proceed if he did back out....I'd gotten him in by just asking nicely and he went in. But when he backed out, he'd then decide he didn't want to go in...now what, the pressure and release I was using apparently wasn't enough(?)

Enter Ben...I've been watching Ben work with a young horse named Franky, and seeing how Franky responded to what Ben asked. Ben is patient, consistent and clear. He has commented and helped me on some sticking points I've had with Mezza. So, I asked him to explain to me what he would do on the trailer loading with Hoss. He had seen Hoss step into the trailer and stand quietly with me, and I told him that it was me tying, getting out and closing him in that worked him up and started him backing. Ben offered to help me, and that has given me the tools I needed for this.

What I've put to heart...
Long story (not too short), when the horse becomes confident in us, and when we've done enough ground work, are consistent, clear, and patient then we (or I in this case) can ask him to perform a realistic task. Hoss was no longer afraid of the trailer as much as he lacked confidence in me. And with guidance, I learned to show him what I expected, and how to watch his reaction and adjust mine. I am now able to load him, have him stand while I tie, put in a hay net, get myself out, put up the butt bar and close the door. Best yet, I know that if he has trouble and backs, I can ask again, and he can rest in the trailer if he needs to work outside it a bit. I used to think that working a horse when they weren't paying attention, or responding well meant I'd done something else wrong. I now realize it is all part of the process, whether it's stalking, or having to put on/release pressure in one way or another, this is how they learn--it doesn't mean run them into the ground!  However, a second thing happens when they work, if they are really uptight (and this applies to us too) the physical work takes care of all the adrenaline and chemicals our bodies release into our system--and suddenly when those are worked away, we (and the horse) start to calm down and think! As long as I am confident, Hoss now loads well--just walks right in and waits.

Goal 3:
Ponying Scout
My third goal for this summer has been to get comfortable ponying Scout, my little (and sore) Mustang using Hoss, my husband's big Appaloosa.

This past Thursday was the first day I actually practiced this in the outdoor arena with help from Jill Wolf, who is a trainer, and my husband.

In the past we had tried bringing Scout along after Hoss, but Scout would often bulk, and we had no real need for this, so we were not persistent. Now however, Scout has been sore in the back often enough, that there has been a real need to move him in a straight line, either by ground driving, walking him in hand, or, my other option, ponying him.

In preparation my husband and I have been taking the two horses out together and walking them together for some time. We've learned that we need to call them on any "ears back" or aggressive behavior. They have been well behaved around each other the past few months. So it was time to find out what our next step should be.

Mike and I tacked Hoss up after a little ground work in the arena. Jill Wolf wanted to watch me warm up and then move Hoss. I need to be able to neck rein, and move him around with my legs. After practicing this, I got off and haltered and brought in Scout. We walked him separately by Hoss' side for a few minutes as I rode and watched their reactions. Jill showed me where Scout's head needed to stay, close to my right leg, and that since Scout was slower than Hoss, I'd need to rate Hoss' speed, and keep Scout to the inside of the arena (shorter distance) or do right-hand turns instead of left to make it easier.

Then Mike climbed on Hoss and took Scout's lead, and I walked along the outside of Scout, and encouraged him along. They did well--we had to call "ears" on Hoss a couple of times, but after that it went well. We will continue to practice for awhile with a second person.